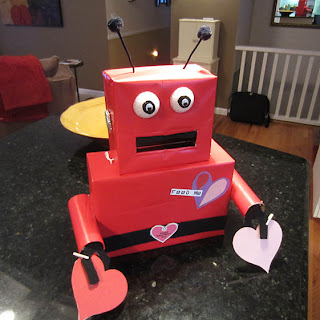 My grandson's class is required to create a mail box for his school Valentine party. My little buddy, Carson, was frustrated about his robot idea.  NeeNee came to the rescue with a little bit of inspiration that helped him conceptualize his idea. This was the end result of his ideas. He is very excited about taking it to school and is hoping that his classmates vote his mailbox as "most creative". 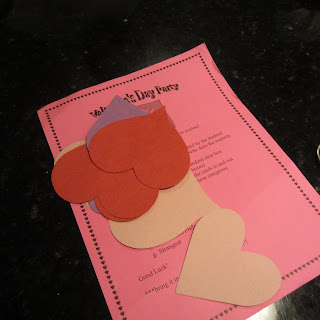 On the left side of the robot, one inch binder rings were used to attach the two shoe boxes. 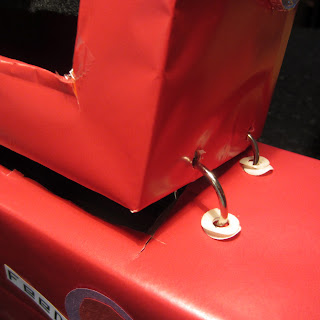 ﻿On the right side, a twist tie was used to secure the box and keep the robot head from moving. My grandson can untwist the tie to retrieve his valentine cards from the bottom shoe box. 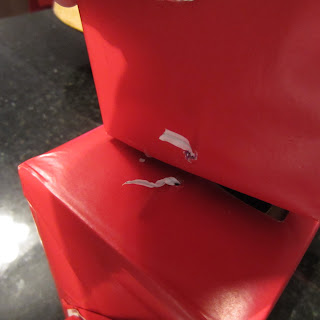 Red wrapping paper and double sided tape were used to cover the boxes. The robot arms are made from an empty paper towel roll (cut in half and cover with paper). My grandson drew and cut the shape of the robot hands on card stock paper. Black felt was cut to cover the hands. The Valentine cards are inserted in the robot's mouth and drop into the robot's body through the opening we cut. 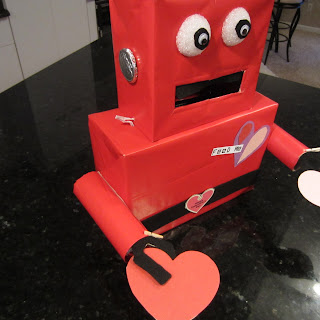 My grandson covered chocolate coins with aluminum foil for the robot ears. I cut a Styrofoam ball in half so he could make the eyes. A black chenille stem (cut in half) and small black pom poms are the antennas. He did a great job and I'm so proud of the effort he put into his mailbox. His younger brother and sister were right there cheering him on. It was a fun family project. Another memory in my memory book.

Email ThisBlogThis!Share to TwitterShare to FacebookShare to Pinterest
Labels: Beyond Soap, Family, Fun Stuff, How To, Joys of Grandchildren, Other Crafts